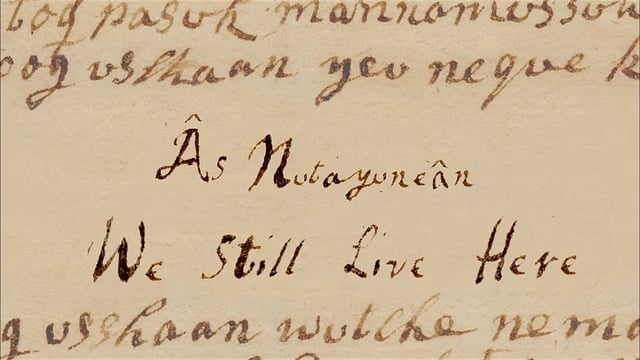 WE STILL LIVE HERE tells the amazing story of the return of the Wampanoag language, a language that was silenced for more than a century.

Celebrated every Thanksgiving as the Indians who saved the Pilgrims from starvation, and then largely forgotten, the Wampanoag Tribes of Cape Cod and Martha's Vineyard are now saying loud and clear, and in their Native tongue, "As Nutayuneân," — We Still Live Here.

The Wampanoag's ancestors ensured the survival of the English settlers known as the Pilgrims, and lived to regret it. Now a cultural revival is taking place. Spurred on by their celebrated linguist, Jessie Little Doe Baird, recent winner of a MacArthur `genius' award, the Wampanoag are bringing their language home.

Like many Native American stories, this one begins with a vision. Years ago, Jessie began having recurring dreams: familiar-looking people from another time speaking in an incomprehensible language. These visions sent her on an odyssey that would uncover hundreds of documents written in Wampanoag, lead her to a Masters in Linguistics at MIT, and result in an unprecedented feat of language reclamation by her people. Jessie's daughter Mae is the first Native speaker of Wampanoag in a century.

"Seeing WE STILL LIVE HERE is a moving and instructive experience. The film captures the emotion of the Wampanoag as they recover their language, which has deep significance for them. This success story of bringing a language back to life will inspire others attempting to revive or revitalize their heritage languages."
Lyle Campbell, Founder of the Center for American Indian Languages, Professor of Linguistics, University of Utah, Author, Historical Linguistics: An Introduction

"A wonderfully told, spirited story of the Wampanoag, whose language had not been spoken fluently for at least a century, rebuilding it — as well as culture and history — word by word from centuries-old written texts...This kind of revival has been taking place across Turtle Island (North America), but it is told here with special elegance, amazing animation, and a personal edge that will, at first, evoke tears of tragedy and rage for a people reduced nearly to nothing. The culture is then reborn in the happy faces of children speaking words that had been silent for generations."
Bruce Johansen, Professor of Communications and Native American Studies, University of Nebraska, Author, Enduring Legacies: Native American Treaties and Contemporary Controversies

"A beautiful film. The content is solid and is appropriate for any educational setting. It weaves a good story by focusing on Jessie Little Doe but also gives the broader picture of language revival efforts by the Wampanoag people...I highly recommend this film."
Chad Thompson, Director, Three Rivers Language Center, Associate Professor, Department of English and Linguistics, Indiana University-Purdue University

"According to the National Geographic Society's Enduring Voices Project by the year 2100 half of the world's some 7,000 language may no longer be spoken by anyone. Anne Makepeace's award-winning film WE STILL LIVE HERE (As Nutayuneân) chronicles Jessie Little Doe Baird and her colleagues using documents written long ago to revive their ancestral language. Their success gives hope to other Native peoples who have lost or are losing treasured ways of life and their precious languages."
Dr. Jon Allan Reyhner, Professor of Bilingual Multicultural Education, Northern Arizona University, Author Honoring Our Heritage: Culturally Appropriate Approaches for Teaching Indigenous Students

"I feel this film is vital for any tribe to view that is trying to save their language. We as the CLCPC would really like to gain tribal support and produce some new fluent speakers."
Jonathan Poahway, Tribal Council Member, Comanche Nation of Oklahoma

"WE STILL LIVE HERE is a stunning antidote to the false belief that Native Americans have disappeared...The film invokes deep scholarship and understanding of how languages are acquired and the realities of what it takes to revive a lost language. I recommend it to community groups worried about the survival of their own language, to those trying to rebuild theirs, linguists and educators who want to learn about the process, and anyone interested in the process of cultural change and adaptation. The content is also informative to people working within higher education — this is a model for how they must assist Native peoples to survive in undergraduate and graduate institutions. A terrific piece of work."
Dr. Margaret D. LeCompte, Emeritus Professor of Education, University of Colorado at Boulder

"I have never seen students react so positively to a film before. WE STILL LIVE HERE offers a moving portrayal of the historical and present day struggles that Native peoples face but gives us all hope for a better tomorrow. Through the courage of Jessie Little Doe Baird, filmmaker Anne Makepeace shows how change starts in unexpected ways. Not only do we see the intricate process of recreating a complex and little-known language, but we also come to understand the deep significance of that project. WE STILL LIVE HERE offers a ray of hope for the future, and is an in-depth and stirring glimpse into the very real world that outsiders too eagerly forget. I would highly recommend it to any college professor."
Daniel Tortora, Assistant Professor of History, Colby College

"Highly Recommended...WE STILL LIVE HERE is documentary filmmaking at its best; it is both informative and emotionally engaging as it weaves a narrative of immeasurable loss and inspiring rebirth...Viewers will come away with a basic overview of language reconstruction, empathy for the experiences of the Wampanoag Indians, and a more complete understanding of U.S. history. The film is particularly relevant for anthropology, linguistics, Native American studies, and U.S. History courses."
Wendy Highby, University of Northern Colorado, Educational Media Reviews Online

"A lovely tribute to threatened and vanishing cultures, proving that even if a culture or language has died it can be at least partially resurrected. It is a heartening tale of the will to survive among native peoples, as well as the contribution that professional linguists and anthropologists can make to this struggle...Suitable for high school classes and college courses in cultural anthropology, anthropology of language, anthropology of threatened/vanishing cultures, and Native American studies, as well as for general audiences."
Jack David Eller, Community College of Denver, Anthropology Review Database

"Why should you care about Wampanoag, or any extinct language, for that matter?...As Makepeace clearly shows in her film, a language can contribute significantly to mankind's collective knowledge."
Nataly Kelly, Huffington Post

"A fascinating meditation on the possibility of life after death — of language...What [the filmmaker] achieves — which very few have ever done — is the focus on native culture to the avoidance of exoticisization. This means that alongside the lush, green nature and woodwind sounds conventional of Native American representation, Jessie is also shown in her home, in the classroom, and in the library, as well as with other Wampanoags playing card-games in their mother-tongue."
James Harvey-Davitt, University of Nottingham, 49th Parallel Journal

"A beautiful film about a fascinating subject...Truly remarkable, and Makepeace captures it with gorgeous cinematography."
Provincetown Magazine

"This a film that should be shown to students studying languages - any of them - because it shows the power of language and the gift of learning one. I challenge you not to want to pick up a language class after seeing this film."
Missy Gluckmann, Melibee Global Education Consulting

"For all that the linguistics and history are interesting and tragic, the film in many way shines because of what we see of the Wampanoag people. The film spends the most time with Jesse Littledoe Baird, who makes for an endearingly unlikely heroine - a middle-aged wife and mother whose passion leads her to do something truly extraordinary."
Jay Seaver, eFilmCritic.com

"Language, heavy muscles in our backsides that hold us erect and opposable thumbs...these are the three elements, some anthropologists contend, that made human evolution possible. Of these three, spoken language most distinguishes us from other species. So what, then, is lost when a language dies? No less than cultural identity, tradition and subtle information about the environment in which that culture existed.""
Kathryn Boughton, Litchfield County Times

"Anne Makepeace's extraordinary film documents the origin and continued efforts of the Wôpanâak Language Reclamation Project. The indigenous Wampanoag Nation of southeastern Massachusetts is noted for aiding the Pilgrims after their arrival in the so-called 'New World' four centuries ago. That foreign invasion ultimately resulted in the rapid decline of their once-thriving culture. The tribes lost their lands and became subject to the laws of the dominant culture, and soon their language began to recede as the native-speaker population dwindled in the years following the American Revolution."
Callista Burns, Boston Independent Film Festival

"There is much to interest cultural anthropologists, ethnomusicologists, and folklorists in Makepeace's film...An excellent tool to use in lore and language, introduction to folklore, Native American folklore, linguistics, Native American history, and ethnic studies classes."
Pauleena MacDougall, Journal of American Folklore